I thought I’d pop in while Harry is sleeping after his midday walk.

This picture is from yesterday when we walked by the horse farm a few minutes from my in laws. These beauties are Harrys first encounter with horses, he was very curious. There were some horses that were in training as we walked by and every time they approached, he sat down and watched. I was a bit nervous he would scare the horses, but he behaved like a pro 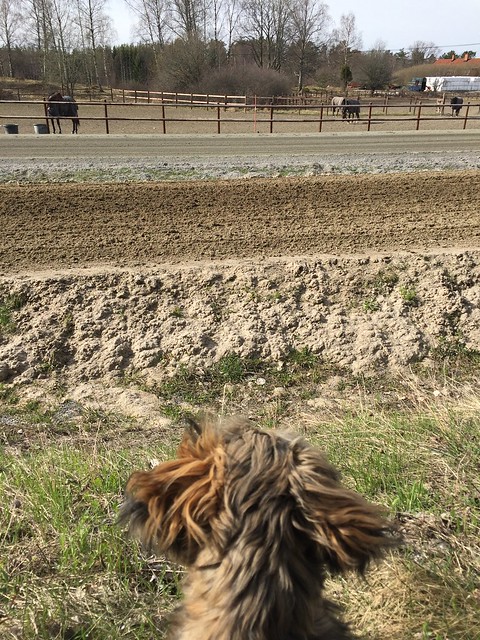 Today we’re having a calm and relaxing day, the weather keeps changing from sunshine, to rain to snow. I hope it will be better this weekend as we’re celebrating Valborg on Sunday.

Valborg (or Valborgsmässoafton) is an annual celebration celebrated in Estonia, Finland, Latvia, Sweden, Czech Republic, Slovenia and Germany on April 30th or May 1st. The tradition is based on the pre-Christian feast that has existed in Germany, but has later come to be linked with the cult of Saint Valborg.

Valborg was declared a saint on May 1 (which was then celebrated as the Valborg Fair, Walpurgistag), and by this circumstance, her name was linked with the pre-Christian German spring celebrations held on this day, which of Christianity were stamped as witch parishes. In particular, it was believed that the witches on Valborgsmässon night between April 30 and May 1 rode on tassels or goats to the old victims and there also did mischief in the company of the devil. In order to harm the specter, noise was caused by cries, shots and horns and lit fire on the heights. Such was the explanation of the Christian times of these early Christian springings. Valborgskulten, which occurred after her death in 779, was largely about protection against witches and evil spirits. Today it’s more of a celebration that winter is over and spring is here. We still light fires and choirs sing traditional songs

I found a dry spot in the rain, and I ain’t movi